For a book lover a new book is a treat he had been waiting for, for a music lover new single of his favorite artist is a thrilling experience, and same is the case with Game enthusiasts whose fervor only rises when they get to own best games in the town. Times have changed but not that much for “Game Boy Advance” fanatics. If you don’t know about GBA then it’s no big deal; it’s a handheld video game console being developed by Nintendo to relish gaming at its best.

If you’re looking for interesting games and have a GBA that still works then brace yourselves for popular GBA games in all imaginable categories. You don’t have to surf your precious hours whilst searching for the games, since in here we’ll discuss about all the games that one can easily play. Moreover, if you’ve downloaded the emulator on your PC then it’ll be a cherry on the cake for the GBA gamers.

GTA is one of the most beloved and famous games, it truly lets you unleash your evil side, to perform illegal activities in quite an unfazed manner. It is one of the times when every gamer enjoyed being a bad guy. In the old times it too was ported to the GBA console. If you have played GTA 3 then you would know that it’s a prequel of it, which already makes it fun to go for.

Metal slug advance is SNK Playmore‘s famous shooting game, which also made its way onto GBA. It is one of the top action games and is the only with Metal slug title available. It offers unnumbered weapons, shooting exposure, unrivalled speed and thrilling experience. If you haven’t played it as yet onto GBA then what are you waiting for?!

As the name suggests it is absolutely an action-driven game. Cody and gang continues to fight for a speckless city. Gameplay comprises some great graphics and action. You have got to fight through streets of the metro city and ought to save Jessica. One has got 3 fighters to be the saviors and moreover one can use weapons or just hands to fight with the rivals.

It is another action shooter game developed by Nintendo’s, and is super famous too. In Metroid one needs to maim the aliens that are being dispersed on the earth and endeavoring to take over. You ought to use the weapons that has been provided and an armor suit to fight the bad forces; one needs to solve puzzles to reach next levels, and as levels increases so is the difficulty level of the game.

It is one of the peerless games developed for the GBA. It is a complete merge of pokemon ruby and pokemon sapphire. You cherish this journey even more when you take your pokemon and instruct them to be the champion. Pokemon emrald is a new addition that one cannot find in other revisions of the game. It is definitely a very catchy RPG game fuller with adventure.

Aye! Harvesting time is here; it can be the most fun-driven game that one could play. Keeping uo with the reality you would be a farmer and going to do the harvest at your large farm. One can harvest poultry, breed livestock,  crops and a lot of other things. You also make friends in the town, and most imperatively your goal is to accomplish various tasks and make your farm the biggest and better farm in the mineral town. There are lot of chances to make money too.

Who doesn’t know about Beyblade or haven’t played with it? If beyblade fandom had hit you too then it’s a good news that you can play it on GBA too. This GBA game follows the same way as cartoon used to have. One can utilize his beyblade in the most innovative ways to destroy the opponents. Let’s gear up for beyblade barminess.

Sport enthusiasts are always ready to witness more and more games. Despite having pretty bad graphics it managed to remain the most popular game as it provided exposure and teams from various leagues all around the world. Also there were top players and no commentary , since GBA had some hardware limitations.

This game was one of the most fast-paced with best looking visuals and fantastic sounds at that time. It was pretty much liked as it was a good racing game for the GBA. Formula one glory can be enjoyed only by playing F1 2002 on the GBA.

One of the many Mario sports that was considered best at that time since it offered fast-paced tennis, the shots, the backhands, the slashes and everything was not monotonous but more arcade like; which already makes it more enjoyable and captivating.

One of the best golfing games, which is equally adventure-driven and offers a lot of fun modes to make it more interesting instead of the same boring golf. Mario with his friends plays golf in it! What a fun golfing it would be.

Games that you want to play on the GBA are all mentioned above and you can easily find them on other platforms like e-bay. If you have downloaded the emulator for your personal computer, then you can easily play GBA games. Happy GBA gaming! 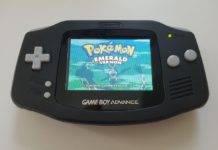